In its April 1952 issue, Pirelli magazine published an article on “Lombard houses”: a reflection on the vernacular architecture that dotted the Po Valley landscape with farmsteads and livestock buildings, creating a sort of “geography of the spirit”. The dry, evocative prose bears the signature of a poet from Luino, Vittorio Sereni: this was his first contribution to the magazine published by Pirelli and directed by Arturo Tofanelli and Leonardo Sinisgalli. Not yet forty, Sereni was already a well-established author. In 1941, before being called up to the front, he published Frontiera, a collection of poems, and in 1947 came his Diario di Algeria, about his experience as a prisoner of war in northern Africa from 1943 to 1945. In 1952, Sereni was teaching Italian and Latin at the Liceo Classico Carducci in Milan, living with his wife Maria Luisa and his two daughters, Maria Teresa and Silvia.

He was one of the “great names” of Pirelli magazine which, ever since it first came out in 1948, published works by great writers and contemporary intellectuals: Ungaretti-Quasimodo-Montale, the “hermetical threesome”, in 1949, Riccardo Bacchelli in 1950, and Piero Chiara and Michele Prisco in 1952. The director himself, Leonardo Sinisgalli, was nicknamed the “engineer poet”. It was Sinisgalli’s name that Sereni wrote in the “references” section on the application form for a job at Pirelli SpA, which he submitted on 16 August 1952. The two of them had known each other since university: these “travelling-companion poets” were joined by Alfonso Gatto, Carlo Betocchi, Giancarlo Vigorelli and none other than the great Salvatore Quasimodo himself, who had already had the chance to praise the young Sereni on his thesis on Guido Gozzano. Pirelli and its magazine were destined to be the place where Sereni and Sinisgalli would meet again. The job application was successful and Sereni entered the “Servizio Propaganda”, now the Communication Department. Its undisputed head was Arrigo Castellani, who had the foresight to set up an office devoted to relations with the Press, and Sereni, who had already worked with magazines like Corrente and Rassegna d’Italia, was put in charge of it. It would be Castellani himself, just before his annual contract expired, who wrote to Human Resources: “We are absolutely satisfied with the work carried out by Dottor Sereni and, indeed, we believe he should in time be made an executive.” The contract was open-ended: the personal file of Dott. Prof. Vittorio Sereni, now in the Pirelli Historical Archive, bears registration number 4062, centralised accountancy office 0400, “Direzione Propaganda”.

During his six years as a Pirelli employee – he left in 1958 for Mondadori – Sereni gradually wrote less for Pirelli magazine. Just a few articles, but weighty ones. One of them, already in issue no. 6, signed V.S., is a “Secret assessment of a year of advertising” after “his” Servizio Propaganda had won the Palma d’Oro della Pubblicità award, thanks to Bruno Munari’s Coria soles, Ezio Bonini’s Stelvio tyre, and Bramante Buffoni’s hot water bottle. Another of Sereni’s Pirelli articles, entitled “A fifty-year-long P”, became a milestone in the history of the magazine, with a legendary account of the birth of the Pirelli logo in New York.

Sereni continued working with the magazine even after he left the company: in 1963 came his clearly autobiographical story “The capture”, which played on the moral conflict between victors and vanquished during the landing of the Allies in Sicily. In 1964, Sereni went from being an external contributor to the magazine to running a literary section called “Nei libri e fuori”. This introduced the Italian public to Primo Levi’s La Tregua, and to Mary McCarthy and Massimo Bontempelli, to Henry Miller’s The Colossus of Maroussi and to the poems of Georgios Seferis, through to Hemingway’s posthumous A Moveable Feast, reviewed in the no. 4 issue of 1964.

Then came “The blue-black phantom” in no. 5-6 of 1964: “So here I’m supposed to be taking the side of Inter, or rather justifying the blue-black shade of part of my thoughts and feelings”. The intellectual gave way to the fan inside him, mourning the loss of the legendary footballer Giuseppe Meazza, called Peppino, the “blue-black phantom”. And where there’s a phantom, there’s a mystery. The original article was published with an abstract drawing by Alberto Sughi. A drawing by Riccardo Manzi, which has recently been purchased by the Pirelli Foundation, dates from the same year, 1964. It shows a football player wearing a blue-black jersey with a note written by a Pirellian: “Nose too big!”. Might this have been an illustration for Sereni’s article? We cannot be sure, but we can date with absolute certainty Vittorio Sereni’s last contribution to Pirelli magazine: an article entitled “Two Venetian voices” in no. 5/6 of 1970. 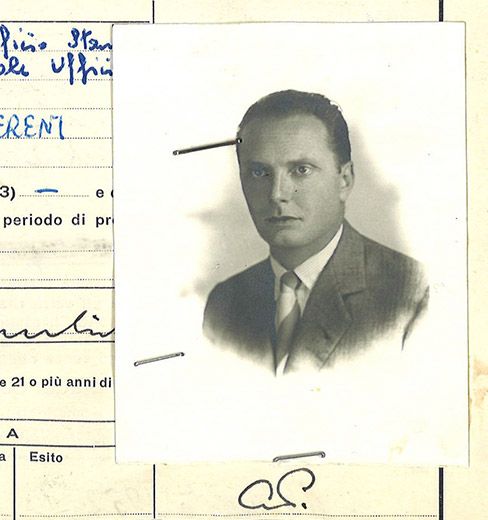 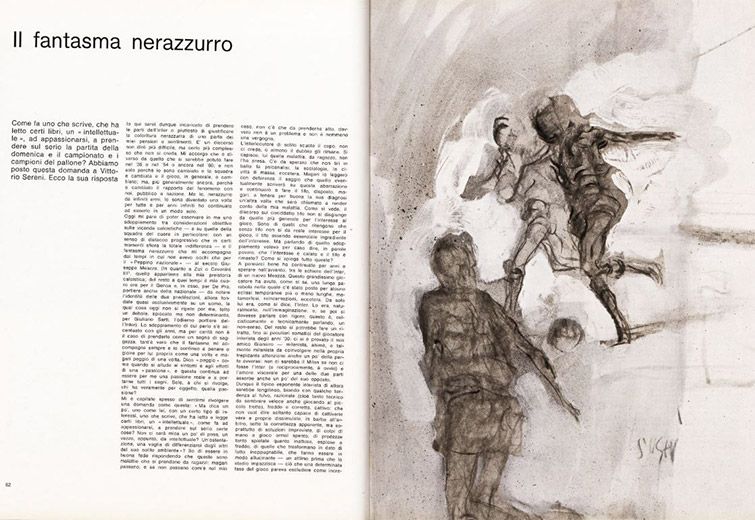 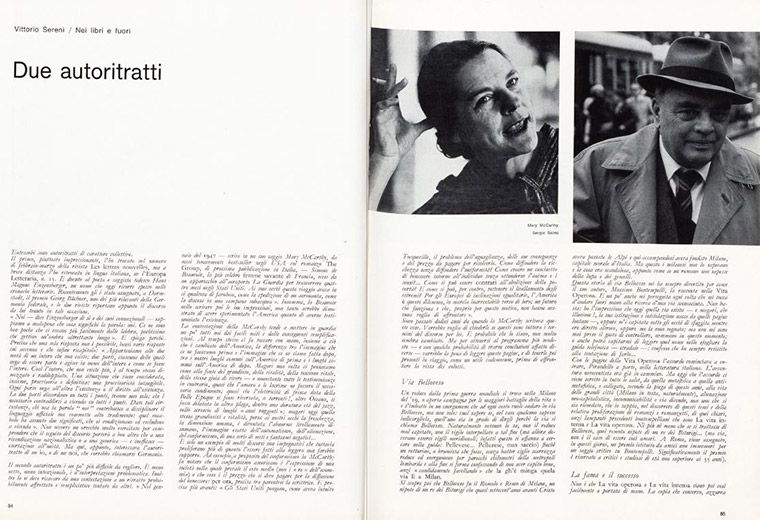 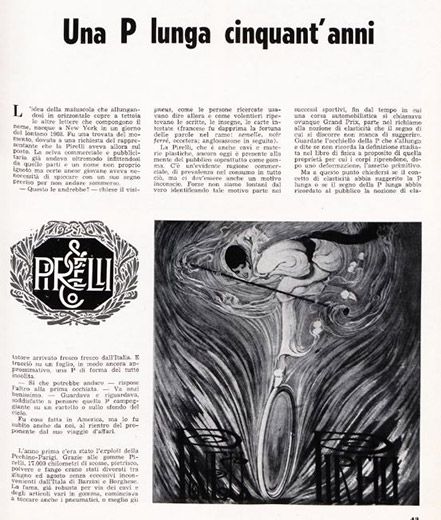 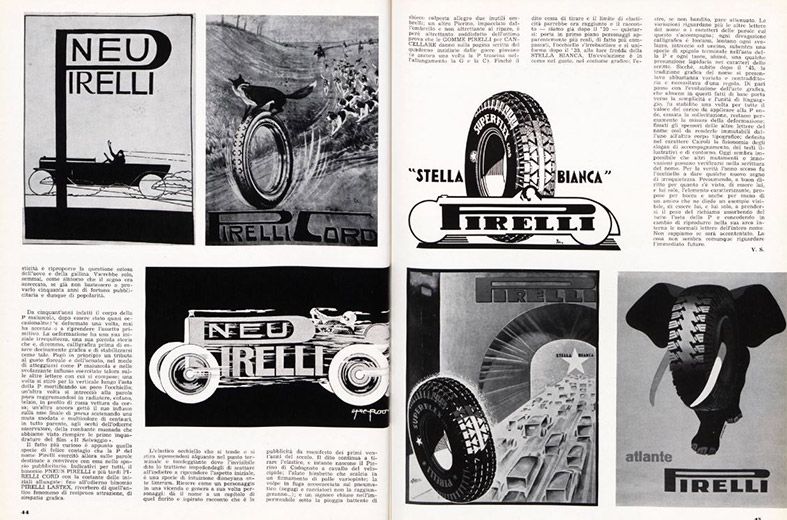