It is well-known that women are even more beautiful when at the sea. Is this because of their nudity evoked by a bathing costume three palms wide? No: it is their happiness that favours this. A manifold happiness made of enchantment and frenzy, of vitality and torpidity, oblivion and predawn memory.

Seeing them standing tall, their feet caressed by white-topped waves, looking out to the sea with the weight of the heavy sky above, and the rocky terrain behind, the sand transformed into a blinding light. Silhouetted in blue, they seem to feel their true and absolute power, free at last, liberated from their daily battles and their daily triumphs.

We see them stretched out on a modern checkerboard of foam-rubber cushions in bright and pale colours. Ensnared in the all-encompassing vibration that pervades everything, even the inert and dream-like, they seem a part of those deep and almost bitter discussions between heaven and earth.

Their happiness has to do with the value of a wonderful day. A day at the beach can last a season, a clear-cut block of serenity from another dimension and system, on those blessed beaches where even joy takes on a different tone and substance.

Suddenly colours are still the same but yet very different: we could say that a polished surface can reflect everything brilliantly, but it is indeed a new and light touch, an intimate confidence we see, in which women impetuously imbibe to reveal their second personality. The most difficult garb to wear is nudity, and consequently, the bathing costume. More than crinolines, more than long trains, more than evening gowns, beachwear can be difficult: not only for the necessities of beauty, but because it requires self-confidence, the only thing needed to veil or even cancel a state of nudity. Physical harmony is important, only as it favours detachment, innocence. Self-confidence, irresistible grace. One should take lessons from statues, nude without memories. This would be a splendid lesson indeed.

A woman who believes too much in her own physical attraction is improper. The essential element is demeanour, and style. Those who consider the pleasure of being at the seaside as a mere opportunity to put themselves on display are wrong: the true mirage is to personify serenity derived from being natural.

With the modern bathing costume, women have conquered an exquisite fluidity and the possibility of forgetting themselves.

Years ago we saw them at the frontline on the shore, under the spotlight of the southern sun, with that arrogance and encumbrance which is now long out of date.

In their continual to and fro in combatting their hesitancy, they appeared either a little too far ahead or too little behind themselves. Insecure of their coquettish nudity, they laughed girlishly: a laugh that hid anxiety and agitation that gnawed away at them. Always a bit less at the bust, the shoulders resisted, and so the knees, which added a little more vexation: everything was a chatter, a big gossip made of muscles. Self-generated fatuous hilarity disarmed and unmasked these puerile figures.

They were seen crossing the beach hurriedly, throwing themselves into the sea, careful to defend their made-up faces and those little curls from the frothy waves.

In that game of boldness and shyness was the risqué charm of bathing costume.

Instead, since women started to look at themselves frankly and to don their coquetry differently, beachwear has become no longer irritating, nor saucy, nor scandalous: now it is simply a wonderful expression of modern life. But this oblivion that held the secret of self-confidence could not merely depend on their feeling at ease and flattered by new costumes that stay up without fasteners, that contain without compressing, and restore to the figure the finest of contours?

[…] This is the origin of that fluidity, that slightly scornful ease, that sense of liberating and joyous space that women show nowadays, the secret of that sometimes high-spirited nonchalance that runs hand-in-hand with spontaneity and can represent the apotheosis of movement: the “clothes that maketh the woman”, are now merely a few inches of fabric; either in printed Lastex fibre textile, or a sort of jerkin for the lower back that creeps up, uncovering almost non-existent shorts, or a silk bayadere, a bust trimmed with a fan of short skirts, either in a tight-fitting modern and abstract print or in two colours, jasmine white and carnation red, a corset like an upturned wineglass reaching just below the flanks.

What does a that flair of Capri, of Positano, Versilia, Lido di Venezia or Ligura mean? It means more than just joie de vivre, and has to do with taste. It is a way of smiling, a certain lightness that has something in common with that inspiring energy of dance: rhythm and liberty. This is what creates elegance with that international touch, an elegance that is unique because only in our Country does the foreigner feel such a level of happiness.

Trips to the beach, holidays by the sea. What we aim to reach – sun, more space, more swimming, more contemplation – is a higher enchantment that could nearly achieve happiness. We want to lose our sight, we want to dream with open eyes. We desire to sink into a soporific nothing, and yet still see. And finally (but this is no secret), in that state of nothingness beatitude is reached, and it renews and deepens our understanding of ourselves.

To forget oneself is to be sure of oneself; and self-confidence is also reached by a look tuned with the season, the place and the date.

Returning to the theme of the sea, we see that fashion has kept up-to-date through art and shows its curiosity towards new trends forms such as abstract art.

In the patterns that animate and bring our new costumes to life, nothing is used to evoke the exterior world, or to give a visual description of objects. What is used is form, colour, movement which corresponds to an impression that has been received and translated. It is difficult therefore to indicate many true pretexts of painting used for fashion; but it is evident that once more art and fashion have a new opportunity of meeting. And what determines the convenience or not, the decency or not, the being modest or immodest regarding nudity, is attitude; and the attitude reflects one’s thought. 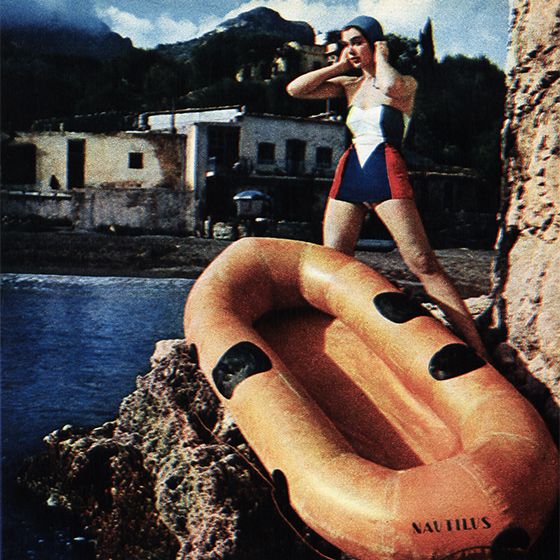 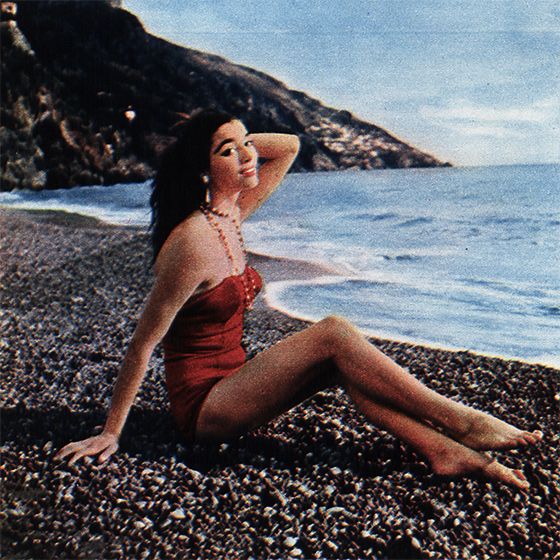