Despite my attempt to appear Milanese, I have only been to the Trade Fair twice. The second time was last year because it seemed inconceivable that someone who had quite recently been added to the Milan Registry office should not dedicate at least a couple of afternoons to the Fair; and out of legitimate curiosity to see what I had first seen in 1946 – the first year of peace after Second World War – had now become.

I found myself in Milan in September for a totally different reason. The Fair opened at 9 o’clock on a Sunday morning that threatened to or had just rained. Avuncular and satisfied, De Nicola presented his speech to a small crowd and then paid a quick visit to the workmen still hammering away in the pavilions; grey prevailed over every other colour, and there was a smell of fresh paint just like at a preview of an art exhibition.

Last year, it was very different indeed, but I realised now that I had seen it differently from how I wanted to. I am convinced that it is our civic duty to visit the Fair and I also believe that I would never have the same opportunity as last year, when I had recently moved to Milan and was still a little lost.

What is the worst temptation of the recent city dweller? Trying to not appear so, avoiding those commonplace preconceptions that unfailingly denounce some form of provincial behaviour. The daily newspaper reporters often pick up on these clichés by defining such places as traps for the innocent and undefended victim: Rome, at trap for pilgrims and tourists; Milan, a trap, alas, visitors to the Trade Fair. This is unfair and somewhat uncharitable and thankless: if it were not for these people, the mythical solidity of Milan would risk being demoted to discussions on cars and trams, traffic jams, underground construction. Thanks to Fair and its visitors – especially those who come in bus loads and on special trains with their return tickets – people speak for months and even years after about their Milanese experience in their remote provincial towns; so fresh and limpid, they are able to recall the events of a single day even decades later.

The rhetoric of the daily newspaper journalists (apart from their homilies to production which count for little or nothing; what really counts is production) mortify the enthusiasm of the visitors. They write about collectors of publicity stamps, giveaway stock cubes, miracle pills and mini-toothpaste samples with an unjustified superficiality. I believe that without these giveaways the Fair as such would be much less important and not worthy of the pride it generates. This is without considering that many of these collectors – the more unscrupulous and organised – are true Milanese, or if not Milan-born, resident of the city, younger than 40 or older than 60 years old.

It is true, the Fair is a huge marketplace: but if a market is made only of sellers and buyers then what kind of market is it? Can you imagine a Fair visited only by buyers rushing from one pavilion to the other looking for representatives of a particular company, exchanging courtesies with their peers, having a quick drink or a coffee, giving a cursory glance and then passing on their order for a product they already know? In other words, a Fair without snacks, mechanical curiosities or useful inventions, without a wet dock or prefabricated villas, without coin-operated treadmills, no eastern section, no girls. The exhibitors could make do with less; they wouldn’t have to study their new layouts, involve architects and joiners, or make large-scale printouts of corporate slogans. The force, attractiveness and appeal of a market is generated by the non-buyers (or those who buy a couple of articles after much meditations and tempted by bargain). My last year’s visit to the Fair was a dress-rehearsal for my third and next visit, which I will soon make. I didn’t visit the Fair on the opening day, falling for the (sadly true) preconceptions of crowds of Milanese visitors and advice from a friend from Montevarchi. “It’s useless going on the opening day, it’s full of people. You’d best wait because even the stands are still half-finished.” Thus, you end up not being able to walk around the Fair for the first seven or eight days because the crowds have all heeded their friends’ expert advice.

I looked forward to and was not disappointed by the audiovisual displays in the corners of the pavilions, brought to life by carpenters in work overalls and the cheerful sound of hammering. Believe me, even 48 hours from closing, there were still some hidden corners where the last nails were being hammered down.

This is part of its colour, as if some mysterious direction gives daily assignments for more nails to be hammered, more screws to be tightened in time for the opening ceremony, when everything is hushed and the visitors listen to the President’s opening speech. Another 2000 nails? Okay, a little every day: and so, every day the Fair has its due dose of hammering and joiners rushed off their feet.

But let’s talk about the visitors. Spring has exploded in its full glory. Even if tradition dictates a rainy and grey Opening Day, it is impossible that all 16 days will pass by without some sun.

And it is during one of those sunny days, in the lethargic early afternoon hours, that one should observe the visitors wandering from pavilion to pavilion without buying anything. Even better between noon and 2pm around the restaurant area or cafeterias during the obligatory pauses (visitors come from outside Milan, arriving early in the morning) that the visitor takes half-way through their day-long fatigue.

They sit at rarely vacant cafeteria tables or improvised seating on steps, especially where there is a little bit of shade and a cool breeze. Even the large bucket of an excavator can be as welcoming as an armchair for the lithe, blonde spectacled girl enjoying the beautiful spring and a last-minute ice-cream. You can be sure that that girl will never understand anything about the enormous earthmoving machine: and yet how useful that conveniently located bucket is!

I can’t remember if it was deliberate or by chance that I found myself at the fair in the ideal moment: fine weather and large crowds. I am no businessman and so I avoided (even if the rules would have allowed me to enter) those slots reserved for sector specialists. Those pivotal moments and fundamental meetings, which add weight to the proud and merited final accounts and sales figures, are perhaps less rewarding and substantial from a human perspective. I spoke of the girl sitting on the bucket of the excavator; a small and insignificant episode of one of the many people that congregate around articles they will never buy. I saw a group of seminarists on a veritable pilgrimage to the construction pavilions, and an aged gentleman with a Basque beret and white, short-trimmed beard (perhaps Swiss or a retired colonel or university professor) making detailed notes on some precision devices, his consort observing his note-taking with pleasant detachment.

The visitors enjoy the pleasure of the impossible. “How much does that cost?”, a visitor asks of an enormous piece of equipment that, for all he knows, could even be some type of funfair ride. To the reply of “200 million” he nods with amazement; next to this inquisitive individual, a more taciturn visitor gleans information from his neighbour and also nods in approval.

The Fair is like a village fair, full of children and young fiancés. An open-air dance floor with a live orchestra would certainly have made good money. How does that famous verse go? April is the cruellest month…, but this cruelty is at its sweetest in that early afternoon when the Fair is underway and cleaners are busy sweeping up old papers and flyers, young girls exhausted from too much walking rest their heads on their fiancé shoulder. After a morning distracted by mechanical devices, their beaus also succumb to the lethargy of spring. Housewives in groups gather round and comment: “Good heavens, such crowds!”, and then discuss their departure. They don’t all agree. “We haven’t seen anything yet; let’s go and take another look”: some of the groups show the first signs of crisis and internal schisms.

Children escape from their mothers to follow their swifter friends who have managed to grab some giveaway gimmick; other mothers abandoned in the shade (“Let’s see when he’ll get a move on”) take the opportunity to experiment a promotional sample of a new tranquillising pill. Resigned to missing the last train home, an enterprising youth tries his charm on the young blonde girl behind the beer counter, proffering a couple of banalities just to test the waters. You never know, but this is sufficient material for a story to tell his friend that he lost sight of earlier that day, and who in turn will tell him a series of very similar stories.

Feet now ache and shoes are coated with grey dust, but if it weren’t like this, then it wouldn’t be a Fair, it wouldn’t be the Fair. The tiredness is the tiredness of an exceptional day, a honeymoon day. The enterprising youth starts to lose stamina; the same fatigue now afflicts those who didn’t go hunting for stamps, or paperbacks or giveaway samples, those who didn’t ask the prices of things they would never buy nor sampled the fritters and tartlets made in 30 seconds with a new and absolutely useful kitchen appliance that they will never buy.

Last year a senseless form of respect impeded me from doing all these things, but now I realise that I could have had more fun and would not have disrespected anyone by asking the price of an excavator or an aeroplane, nor would I have suffered any indignity by succumbing to my repressed desire to try wines, to collect brochures and leaflets, to doze off on a bench with a newspaper over my eyes, to let myself be shuttled around by one of those mini-vehicles, or to abandon myself – nobody would even have realised – to my second infancy.

I said that this year I would do better, but perhaps with a more rational and detached approach to doing what I secretly desire but will be even more unable to do. Some, however, can do what they desire, enjoy themselves without beating about the bush like me, and perhaps this is why the world keeps on going. 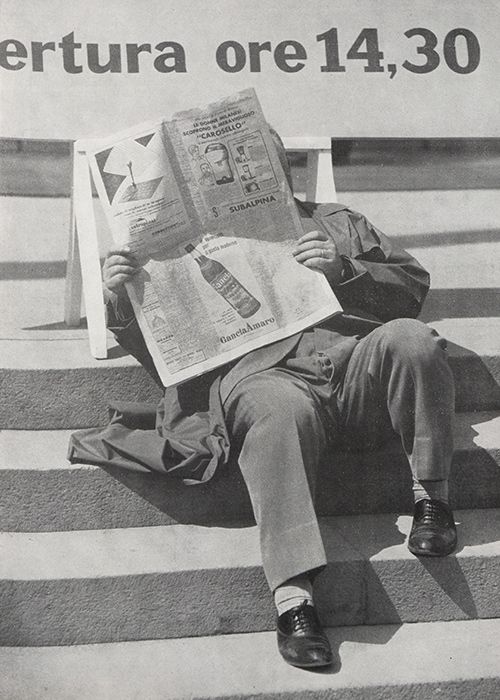