This study on the somatic and psychological typologies of the two champions illustrates indisputably why these two champions have always been ahead of the rest, while never surpassing one another; so similar and yet so different

A characteristic of Italian road cycling is the presence of one or two athletes that stand out from the others so much that their names define the period of their sporting supremacy. Thus, the period 1903 to 1908 had its protagonists Gerbi and Cuniolo, from 1909 to 1913 Ganna and Galetti, then 1914 to 1925 with Girardengo, 1926 to 1932 with Binda, 1933 to 1935 with Guerra, and then 1936 to 1940 Bartali; and since then, we live under the constellation Bartali-Coppi. Previous passages were marked by a brief period of duel between the older ace, who had reached the end of his career, and the rising star on the cycling horizon; but now for almost a decade there has been no exclusive predominance nor transition, but equilibrium and competition between two champions who share the divided passions of the masses and the technical admiration of experts. This extraordinary resilience of an athlete who, according to the norm, should already have buckled under the weight of a fresher adversary, is the expression of the gifts of such exceptional cyclists that we will now examine. It was certainly not ideal for Coppi to find himself in the footsteps of a predecessor who, though already seven years before he had made the motions of signing his act of succession, still today strongly contests Coppi’s accession to the throne, despite the latter’s results on tracks and roads which are worthy of a truly exceptional athlete. Ten years have passed since that 1940 Giro d’Italia victory (confirming the promises made in the previous year’s Giro del Piemonte), when Fausto Coppi let it be known that one day he would substitute the great Bartali. That clear, cloudless and mist-free day has still not come; the Bartali-Coppi issue still lures the masses, and is at the heart of any great race in which both athletes participate. Still today, public opinion is divided between the champions, and the moment has not yet arrived to evaluate and compare the careers of one or the other, to determine who is the most active; both are still very much in the game.

As almost all competitive cyclists, Bartali and Coppi have modest origins (Bartali’s father being a bricklayer, and Coppi’s father an agricultural worker); Bartali, the third of four children, and Coppi the second of five siblings meaning both have numerous families. Neither made much progress at school, but both dedicated their energies to cycling while still young, and by the age of 21 they had already started their professional cycling careers. They won their first important races in the early years of professional cycling: Bartali the Portocivitanova-Aquila stage of the 1935 Giro d’Italia for a lead, and Coppi the Florence-Modena again for a lead in the 1940 Giro. This, together with the Bari-Campobasso of 1913, the Naples-Bari of 1925 and the Naples-Rome of 1930, respectively the first great victories of Girardengo, Binda and Guerra, makes the Giro d’Italia both a testing ground for champions and a trampoline to launch careers. Furthermore, this confirms the custom that true athletes manifest themselves immediately; in cycling, there are few excellent late-bloomers (not with respect to their age, as Guerra would be one of these, but with respect to their early training).

Undoubtedly Bartali and Coppi are the two great cyclists of the period straddling the war, but the profound somatic and psychological differences between our two protagonists are clear demonstration that there is no perfect or ideal physique to guarantee superiority in all of the cycling specialities. […]

Bartali and Coppi are not only different physically but also in character. I recall the sincere and open religiousness of “pious Gino”, further entrenched by the tragic death of his brother Giulio, his natural good-nature, altruism, sense of family, and generosity. This does not mean that Bartali is any less able than Coppi at managing his athletic patrimony. Indeed, he is a more wordy than reflective reasoner, rather intolerant towards criticism, especially any which compares him to Coppi; he has a tendency to unlimited trust and deaf diffidence, and believes in himself more than is generally thought – but one can certainly not accuse him of empty presumption. Spiritually, he has always been a purist, but his daily regime – still morally irreprehensible – is now less severe and rigid than it was some time ago.

Taciturn but more acute, hyper-sensitive to the point of being impassive, Coppi’s morale is conditioned by his physical form, by the quality of his adversary, and by the environment. Logically, it is his rivalry with Bartali that weighs heaviest on him, and where he sees the nightmare of danger. There will be much to write on this dualism, and it is not easy to evaluate the human, professional and sporting factors that motivate, arouse or sometimes lead him astray. Indeed this is one of the central issues at this moment in Italian cycling, and perhaps one of the most delicate, as it is difficult to define precisely how far the right of the elder of the two to defend his position and the duty of the younger to attack it might extend, not to speak of the capacity of both to disregard any sporting or personal interest and the expectation of the public who see sport as a means to satisfy their personal sporting and national aspirations.

A more complete and definitive analysis of the two championships might be possible one day, but only when they have finished astounding the sporting world with their undertakings. 1949 sees both champions at a turning point and promises many occasions for each of them to do their utmost to challenge themselves, and their adversary. 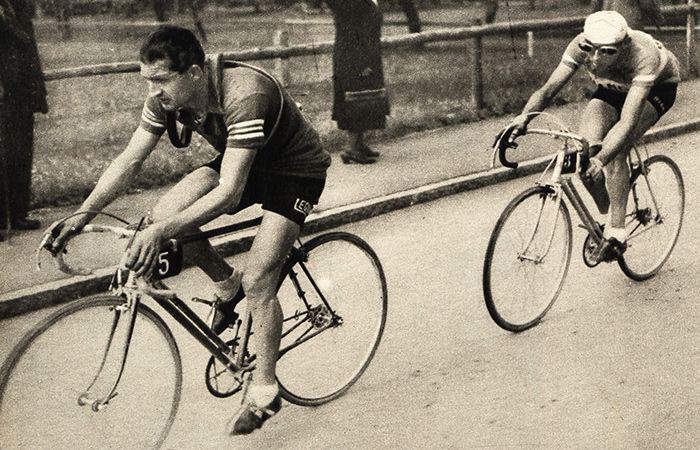 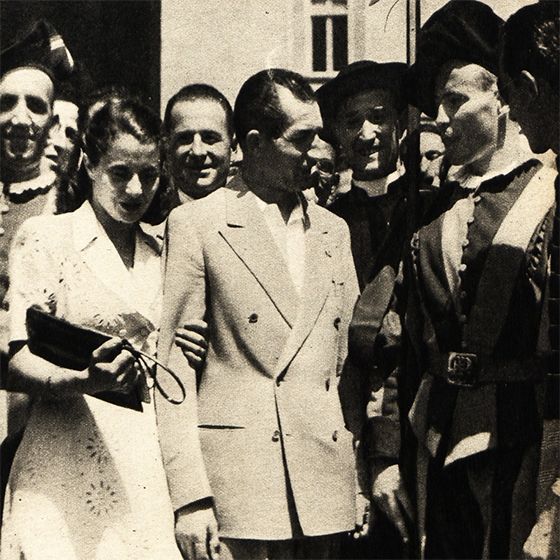